The Magicard 300 is backed by a 3 year limited warranty which includes printhead coverage. An optional additional one-year warranty is available at time of purchase.

The sleek Magicard 300 ID card printer boasts a number of advancements- not least the pioneering digital shredding capability meaning once information has been used for a print job, it is fragmented and dispersed, rendering it irrecoverable – significant in response to increasing worldwide demand for regulation of personal information including initiatives such as the European Union’s GDPR requirement.

This is in addition to existing anti-fraud technology available to all Magicard printers, including the pioneering HoloKote® feature, originally developed by Magicard, which allows for the application of a secure watermark to every ID card. Apart from 3 standard designs included, users can load up to 3 anti-fraud Custom HoloKotes® direct onto the Magicard 300 giving them the ability to tailor their cards to reflect an organizations’ logo, or another unique security design. 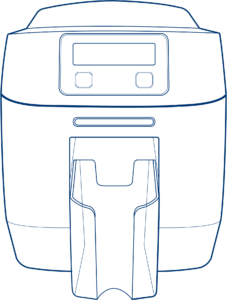 Efficiency: Printer firmware analyses the colors sent by the driver and the film type fitted and print the panels in sequence so the film panels are not wasted.

Faster speeds: The Magicard 300 prints at a rate of up to 160 full color single-sided cards per hour.

Improved connectivity: USB2.0 High Speed & Ethernet as standard and can integrate most third-party applications held locally or in the cloud.

Improved print quality: The Magicard 300 is capable of printing at 300 x 300 dpi. It takes advantage of a wide color spectrum delivering more vibrant and color-rich output, allowing for a truer representation of the subject -essential for photographs on ID cards and accurate depiction of corporate logos and other images.

Smoother integration: integrate with existing network infrastructure ‘out of the box’, minimizing set-up time and requiring limited technical knowledge making it quick and easy to get the printer up and running

We can only show our lowest prices after you have securely logged in due to manufacturer minimum advertised pricing (MAP) policies.