Easy Badges is delighted to announce the launch of the Magicard 600, the most secure printer available to the ID-card printing market. The Magicard 600 ID card printer is available in both single sided or dual sided printing options. The 600 printer can print a full color card in about 18 seconds or in monochrome in about 5 seconds per card. The printer comes standard with both USB and Ethernet connections. The Magicard 600 comes standard with a 100 card input card feeder and a 70 card capacity output hopper.

Free Shipping on Orders of $35+

Easy Badges is delighted to announce the launch of the Magicard 600 ID card printer, the most secure printer available to the ID-card printing market.

It’s the latest addition to Magicard’s direct-to-card printer portfolio, developed in response to increasing worldwide demand for regulation of personal information. Unlike other ID card printers, the Magicard 600 has a digital shredding(TM) capability: once information has been used for a print job, it is fragmented and dispersed, rendering it irrecoverable. The printer also receives push updates from scans against the National Vulnerabilities Database, ensuring that the system always conforms to the highest levels of security.

These features are in addition to existing anti-fraud technology available to all Magicard printers, including the pioneering HoloKote® feature, originally developed by Magicard, which allows for the application of a secure watermark to every ID card. Users can load up to 10 anti-fraud Custom HoloKotes® directly onto the Magicard 600 giving them the ability to tailor their cards to reflect an organizations logo, or another unique security design.

An eye for detail –capable of printing at 600 x 300 dpi*, the Magicard 600 allows you to include even the smallest of text -and make it legible.

Superior quality –The Magicard 600 offers a wide color spectrum so printing is more vibrant and color-rich. That means a truer representation of the subject – perfect for photographs on ID cards and more accurate depiction of corporate logos and other images.

Plug and play -to get you up and running quickly and easily, the Magicard 600 integrates with existing network infrastructure ‘out of the box’ via USB, minimizing set-up time and requiring little technical knowledge.

Faster speeds –each full color, single-sided card, with HoloKote®, can be printed in under 20 seconds giving Magicard 600 the ability to print up to 190 cards per hour. 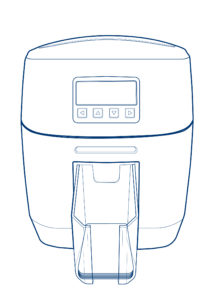 The Magicard 600 has Wi-Fi connectivity as standard out of the box via a dongle which is supplied as part of the package. The printer is IEEE 802.11b/g/n compliant with connection of speeds up to 300Mbps and supports WPA and WPA2 encrypted connection (host dependent).

The Magicard 600 is available in a selection of colors (minimum order applies). Neutral grey and white is the standard scheme with alternative colors Yellow, Magenta, Cyan, Black and pure White, representing the building blocks of color.

0
0
Your Cart
Your cart is emptyReturn to Shop

There's an Easier Way to do ID